“Our IAA which art in Israel”

Tourist confesses to taking a stone from an Israel Antiquities Excavation 12 years ago.

Twelve years after a stone disappeared from an Israel Antiquities Authority Excavation south of the Temple Mount, a tourist from New York confessed: “I Took It. My Conscience Bothers Me and I Am Asking for Forgiveness” The stone, which weighs 21 kilo, was returned to Jerusalem this week.

Here is part of the account released by the IAA in Jerusalem.

In 1997, a twenty one kilogram fragment of a marble column disappeared from one of the excavations the Israel Antiquities Authority was conducting south of the Temple Mount.

Several weeks ago, the IAA received an unexpected e-mail from a clergyman in the state of New York: “I am requesting forgiveness for a member of my congregation”, he writes. “The fellow confessed to me that twelve years ago he took a stone from Jerusalem and his conscience has bothered him ever since. I wish to return the stone to Israel and hope that you will forgive the man for his transgression”.
A letter from the fellow was attached to the heavy stone fragment, which arrived in Jerusalem in a wooden crate that was specially constructed for the flight back to Israel. “I came to Israel on an organized trip. As a student of archaeology, I was very excited when we visited an excavation south of the Temple Mount. I asked how I can purchase a stone from the excavation because I wanted a souvenir with which to pray for Jerusalem and was told it was not possible. On the last day of the trip our Israeli tour guide approached me and took the stone fragment from inside his coat. ‘Take it’, he said. ‘It’s a present from me’. I asked him how he obtained the stone and he replied, ‘It’s okay; don’t worry’. I was very happy and took the stone with me on my flight back to New York. Only later did I realize that he probably took the stone from the excavation without permission. For the past twelve years since then, rather than remind me of the prayer for Jerusalem, I am reminded of the mistake I made when I removed the stone from its proper place in Israel. I am asking for your forgiveness”. 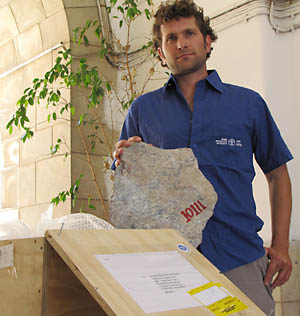 Shay Bar Tura displays the package and the returned stone. Photo by IAA.

Shay Bar Tura, Deputy Director of the Unit for the Prevention of Antiquities Robbery in the IAA, stated,

It should be emphasized that any activity conducted at an antiquity site requires permission from the IAA. Taking archaeological artifacts from antiquities sites constitutes a severe criminal offense which is punishable by law with imprisonment”.

Who was the tour guide?