Healing of the blind man at Bethsaida

There are several accounts in the Gospels (Matthew, Mark, Luke, John) of Jesus giving sight to the blind.

My eyes have experienced several problems over the past few years. I am fortunate to have received excellent care from a team of competent professionals. Earlier this week I had my first cataract surgery. I have been surprised that most of my friends who knew about the surgery asked “which eye?” I always said, “right,” but I wonder if their response would have been different if I had said “left.”

When you had your cataract surgery I thought it was minor and routine. When I had mine it was more serious! Actually it was not too difficult. I can tell that I see better in the right eye, but I must wait a couple of weeks to see what will be done about the lens I have been wearing before I will know how effective it has been. And then there is the left eye.

Well, all of this got me to thinking about the miracles of Jesus in the healing of the blind. One of the physicians at the clinic where I go has a nice piece of sculpture in his waiting area. 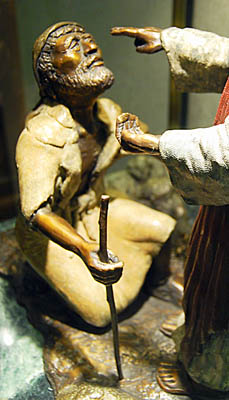 Bethsaida is now identified with et-Tell. In with Jesus through Galilee according to the fifth Gospel, the late Bargil Pixner points out that the man was healed in stages. He then says,

The place of the healing near Bethsaida is marked today by a memorial stone on which two eyes have been chiselled, one half-closed and the other open brightly. (page 95)

I had the opportunity to meet Pixner once at Tabgha and have him autograph a copy of his book. I asked him if he knew how long the marker had been at the site. He told me exactly and then added, “I put it there.” You might like to see that memorial stone.