More on Damascus and Paul

It has been my pleasure to visit Damascus several times since 1967. David McClister, a colleague from the Biblical Studies department at Florida College, and I visited the city in May, 2002. We tried to identify the traditional places associated with Saul’s stay in the vicinity. Southwest of the city, within sight of Mount Hermon, and on the road toward Jerusalem, there is a Greek Orthodox chapel marking the site where Jesus spoke to Saul. We drove as far south toward Quneitra in the Golan Heights as the military would allow. We can not be sure that the chapel marks the exact spot, but we know it was nearby.

Off Straight street one can visit the house of Ananias. All we can say with certainty is that this is another of those uncertain traditional places. Luke tells us that Ananias went to the house of Judas where Paul was staying.

An ancient wall still surrounds much of the old city. A modern chapel is built into the wall to indicate the place where Paul was let down through a window when a plot was made to kill him (Acts 9:25; 2 Cor 11:32-33). 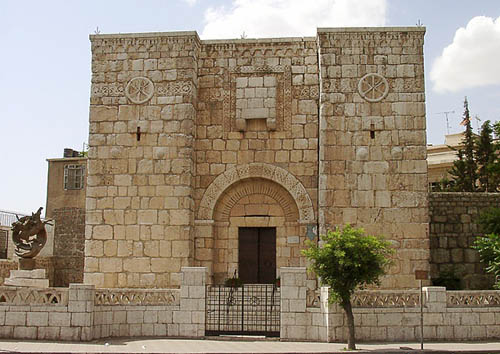