We spent the day visiting sites in the Galilee region of Israel. This morning we stopped by Magdala, but was not successful in getting photos. New excavations were conducted a few months ago, but the site is fenced and locked. In the afternoon I found a location on the road above that provided a fairly good overview of the site.

Magdala is not mentioned in the Bible, but is thought to be the home of Mary Magdalene. According to the gospel of John, Mary Magdalene was the first disciple to see the “open tomb” of Jesus.

Now on the first day of the week Mary Magdalene came early to the tomb, while it was still dark, and saw the stone already taken away from the tomb. (John 20:1).

As we continued North I noticed a good view of Mount Arbel and the Via Maris (the way to the Sea).

We tried to locate the cove of the sower, a sort of natural amphitheater that may be the site of Jesus sitting in a boat and speaking to a larger crowd of disciples on the shore (

And He got into one of the boats, which was Simon’s, and asked him to put out a little way from the land. And He sat down and began teaching the people from the boat. (Luke 5:3).

Our next stop was the Greek Orthodox church at Capernaum. From there we went to Gamla, an impressive fortress east of the Sea of Galilee. Jewish zealots were defeated by the Roman army about A.D. 66. Josephus describes the site in vivid terms:

for it was located upon a rough ridge of a high mountain, with a kind of neck in the middle: where it begins to ascend, it lengthens itself, and declines as much downward before as behind, insomuch that it is like a camel in figure, from where it is so named, although the people of the country do not pronounce it accurately. Both on the side and the face there are abrupt parts divided from the rest, and ending in vast deep valleys; yet are the parts behind, where they are joined to the mountain, something easier of ascent than the other; but then the people belonging to the place have cut an oblique ditch there, and made that hard to be ascended also. On its slope, which is straight, houses are built, and those very thick and close to one another. The city also hangs so strangely, that it looks as if it would fall down upon itself, so sharp is it at the top. (Wars of the Jews 4:5-7)

See for yourself in this photo I made today.

About Noon we stopped at Kursi, the site of a 6th century Byzantine monastery near the possible site of the miracle of the swine (Mark 5:11-13). See an article by Charles Page, excavator at Kursi, here.

We drove north in the Golan Heights and crossed from east of the Jordan River to the west side at a site called the bridge of Jacob’s daughters. We had some beautiful views of the Jordan River in this area north of the Sea of Galilee. It appears that some folks were having a lot of fun on the Jordan. 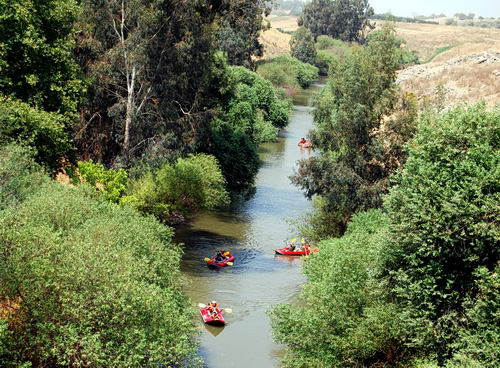 Jordan River at the Bridge of Jacob

We made a stop at Hazor and I quickly made photos at each major area on the tel. We were here earlier this year, but I wanted to get a few additional photos.

Our last major stop was at Tel Kedesh in Upper Galilee, near the Lebanon border. This Kedesh was located in the territory of the Israelite tribe of Naphtali (Joshua 19:37). It is probably best known as one of the six cities of refuge assigned to the tribe of Levi (Joshua 20:7; 21:32).

By the time we pulled in to our hotel on the shore of Lake Kinneret, we were ready for a shower and a good dinner.