The Arabah road and Arad in the Negev

This morning we left Eilat and headed north along the Arabah road (Deuteronomy 2:8) to the Dead Sea where we planned to spend the night. On our right hand, to the east, was the territory of ancient Edom. Before checking in at the hotel, we went east up to Tel Arad. Arad is located in the Negev about 20 miles east of Beersheba.

The biblical account informs us that the king of Arad fought against Israel and took some as captives.

When the Canaanite, the king of Arad, who lived in the Negeb, heard that Israel was coming by the way of Atharim, he fought against Israel, and took some of them captive. (numbers 21:1).

Israel promised the LORD that they would destroy all of the cities if He would give them victory in a second battle.

It seems that the Kenites settled in the region of Arad (Judges 1:16). Note the reference to the “wilderness of Judah” in this text.

Tel Arad consists of two mounds. The Canaanite city belongs to the Early Bronze Age II (2900-2700 B.C.). The other is from the Iron Age, ranging from the time of Solomon to the end of the Kingdom of Judah. Various suggestions are made in an effort to solve the problem of the gap in occupation from 2700 B.C. to about 1200 B.C., when the city was built as a fortress.

Several sites in Bible times had places of worship in competition with the temple at Jerusalem (Dan, Bethel, Beer Sheba, et al.) (Amos 5:5; 8:4). One fascinating thing about Arad is the temple built to dimensions similar to the temple in Jerusalem. In the courtyard there is an altar of the same dimensions as the altar of burnt offering at the tabernacle. In the holy of holies there are two small incense altars and two standing stones. The originals are in the Israel Museum. 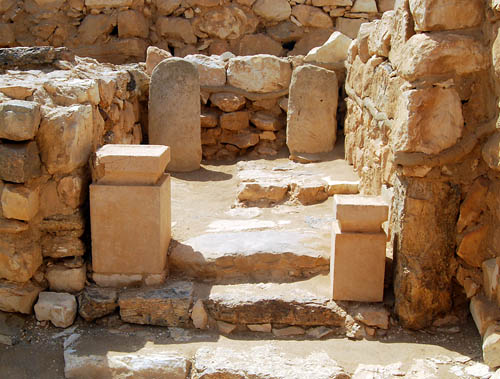 On the way back to our hotel on the Dead Sea I made several photos of the wilderness of Judea. This view shows the Dead Sea. Notice the wadi. 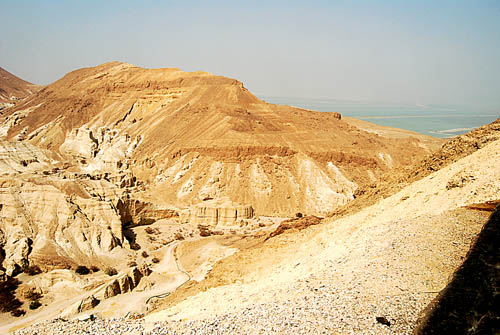 The wilderness of Judea at the south end of the Dead Sea. Photo by F. Jenkins.

One response to “The Arabah road and Arad in the Negev”