China has been in the news a lot in the past years. Most recently we have seen them assuring us they could resolve a severe pollution problem within weeks. Then there were all of those toys containing lead. One day we told our little grandson to take something from his mouth that he had picked up off the floor. He said, “Why, was it made in China?” We heard that the media in China to cover the Olympics would have free access to the Internet, but then certain sites were blocked.

More serious than all of this are those matters pertaining to human rights and the restriction of religious rights. In 1986 we carried a few Bibles into the country and gave them to individuals or left them where they might be picked up. Several friends who have visited China, or lived there for short periods, have mentioned the restrictions and the secrecy under which Christians meet for study of the Bible and the worship of Christ.

Here is a photo I made in 1986 in one of the cities we visited. The only news the people got was what the government posted for them. Such censorship is deplorable whether in China or elsewhere. It is based on fear. I was in Bangkok when I learned of the Tiananmen Square protests of 1989. The next few days in Hong Kong I saw marches protesting what was happening in mainland China. Several people had copies of newspaper reports about the incident. They wanted us to fax or mail them to their friends in China. 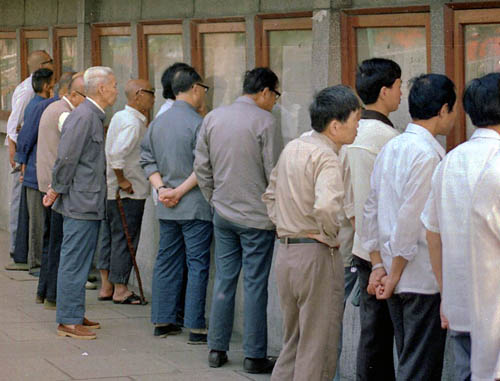 Men lined up to read the news in China in 1986. Photo by Ferrell Jenkins.

We hope the time will come when the people of China will have free access to the Bible and all other information so readily available to those who live in freedom.

Like Loading...
This entry was posted in Bible Study, Censorship, Culture, Travel and tagged China, Internet, Olympics. Bookmark the permalink.