Anyone interested in reaching citizens of America with the gospel of Christ should be interested in the Pew Forum report on the Religious Landscape Study. You may read a summary of the key findings here. You may download the 18 page report and/or the full report of 268 in PDF.

According to the report, among Evangelical churches 57% believe many religions can lead to eternal life. Eighty seven percent of mainline Protestant churches believe that. Not far behind 89% of Buddhists. The same view is held by 56% of Muslims in America.

One interesting aspect of the report is the percent who see a conflict between religion and modern society. The total of all Americans is 40%. And 42% of these say their values are threatened by Hollywood. You might find the views on abortion and homosexuality surprising, too.

The summary concludes with two paragraphs on the effect of secularization.

It remains to be seen how this trend toward secularization will ultimately impact religion in the U.S. But what is clear is that religion remains a powerful force in the private and public lives of most Americans, a fact amply illustrated by the findings of the U.S. Religious Landscape Survey discussed in this report.

Will the buildings in which we meet one day stand in ruins (physically or spiritually) like this 550 A.D. building, called Basillica B, at Philippi? Read Acts 16 and Paul’s Epistle to the Philippians. 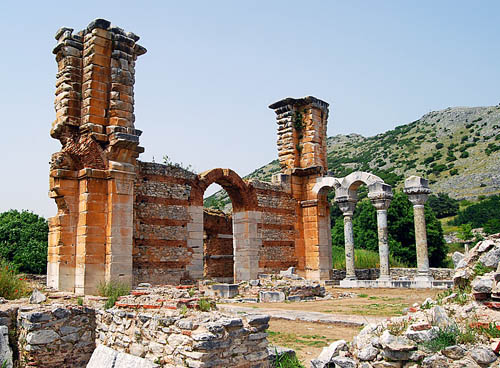