The Death of Aaron on Mount Hor

When Aaron, Israel’s first High Priest, died his son Eleazar became the High Priest. The book of Numbers says that Aaron died on the mountain top of Mount Hor.

Deuteronomy records that Aaron died at Moserah (10:6), but it also records that he died on Mount Hor (32:50). We need not think of this as a discrepancy.

Mount Hor is identified traditionally with Jebel Nebi Harun in the territory of ancient Edom near Petra. From the area of the hotels above Petra one can see the white Moslem shrine marking the tomb of Aaron on the top of Mount Hor. This photo shows the monument in the distance. The mountains reflect the typical color of the area around Petra. 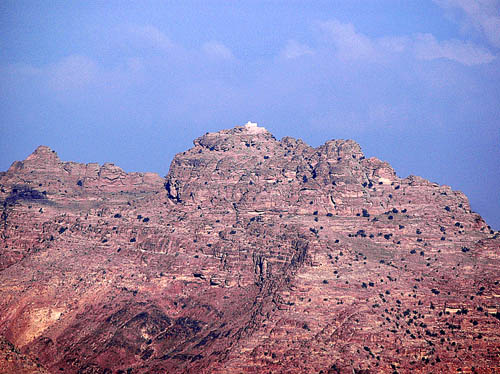 3 responses to “The Death of Aaron on Mount Hor”