The Persian background of Iran

The August, 2008, issue of National Geographic has a good article on the Ancient Soul of Iran. The emphasis is on the rich Persian history of the area. The article is online at ngm.com. The article includes many of those fabulous NG photographs. Most of them were shot in low light to evoke the past glory of Iran. There are more photos at the website than in the magazine. You might be able to buy a copy of the magazine at your local bookseller.

Iran is the only major area of the Bible world that I have been unable to visit. Maybe that will change within the next few years. Marguerite Del Giudice says,

In fact, the first thing people said when I asked what they wanted the world to know about them was, “We are not Arabs!” (followed closely by, “We are not terrorists!”

The article features the people of Iran, and not the government. There are some interesting comments on the influence of Zoroastrianism’s teaching.

Many of the great museums of the world have ancient Persian artifacts. This is especially true of the Louvre, the British Museum, and the Oriental Institute of the University of Chicago. Here is a photo from the Louvre of one of the Persian archers. 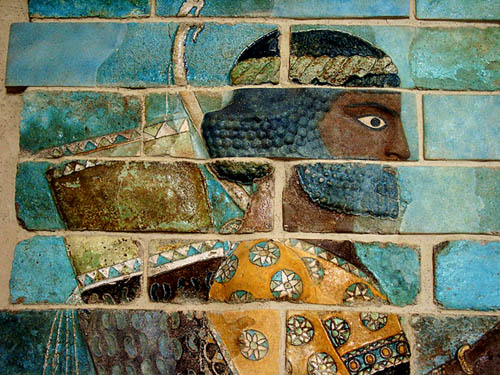 Archer from the Palace of Darius in the Louvre. Photo by Ferrell Jenkins.

The Persians played a significant role in the Restoration of the Judeans to their land after the Babylonian Exile. Here are a few highlights.