In the early days of my travel to the Middle East (1967-1975) our groups always visited Baalbek. From Beirut on the beautiful Mediterranean we drove  through the Lebanon Mountains.to the Beka Valley where Baalbek is located. This valley is more than 3800 feet above sea level. The headwaters of the Orentes and Libani rivers are in this valley.

In Roman times Baalbek was called Heliopolis, the City of the Sun. The ruins at Baalbek are among the most impressive in the world. There are three temples: (1)  Jupiter; (2) Baachus; (3) Venus.

My last visit to Baalbek was in 2002. The Beka Valley was a Hezbollah stronghold and was filled with soldiers and artillery, all pointed south.

I would like to see peace prevail in Lebanon for many reasons. The one I will mention here is that it would allow many people of the West the opportunity to see the wonderful sites of the country, including Baalbek.

This photo is of the reconstructed propylaea, the monumental gateway, leading to the temple platform. 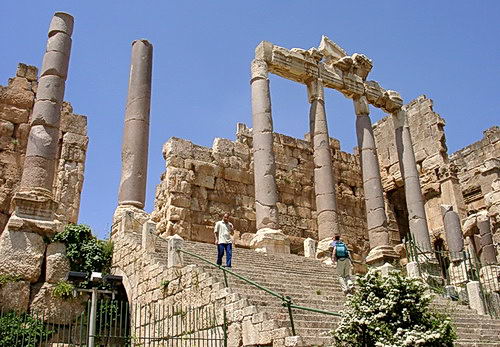 The reconstructed propylaea of Roman Baalbek. Photo by Ferrell Jenkins.