See our previous post on Aleppo here. Our #1 on the Aleppo National Museum is here.

In the first post on Aleppo I posted a photo of the Hittite Storm god Teshub standing on the back of a bull. I should have mentioned at the time that a large temple of the storm god from the Late Bronze and Early Iron ages has been excavated underneath Islamic buildings at the Aleppo Citadel. A well illustrated article by Kay Kohlmeyer states,

The storm god, first venerated as Hadda, then as Addu, Teshub, Tarhunta, and Hadad, played a supra-regional role in the ancient Near East, which explains the enormous size of his temple at Aleppo and the brilliance of its relief decoration. (Near Eastern Archaeology 72;4 (2009).

A statue of Hadad of poor quality is also displayed in the museum. 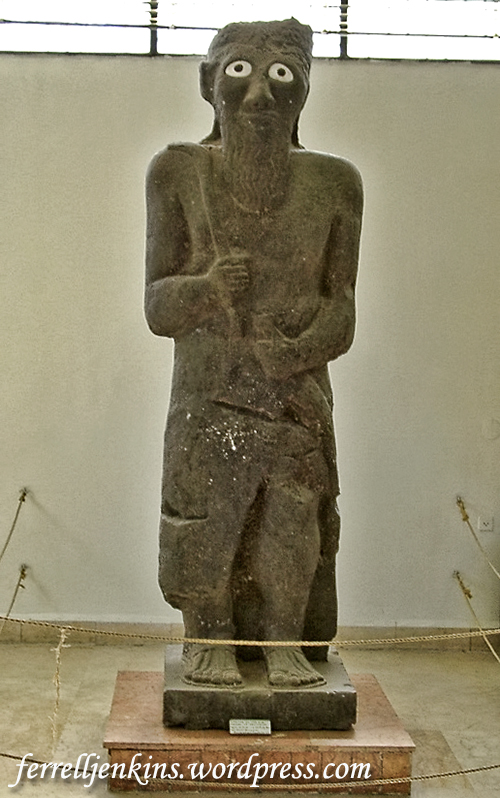 Statue of Hadad displayed in the Aleppo National Museum. Photo by Ferrell Jenkins.

There are several other Neo-Hittite artifacts in the Aleppo National Museum. This first I am showing is a basalt lion with a slight wing relief. This is likely part of a pair that stood along an entrance to some building. Here you will notice that the lion is represented as having five legs. This allows the passerby to see at least four legs from almost any direction. We have become familiar with the huge winged bulls from Assyria that are made in the same fashion. I do not have the original source of the lion, but there are numerous Neo-Hittite sites  to the north of Aleppo in Syria and Turkey. 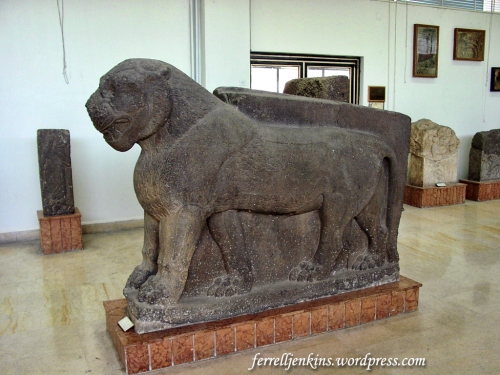 Lion from the Neo-Hittite Period in the Aleppo National Museum. Photo by Ferrell Jenkins.

The next image is a fascinating one from the palace of Karara at Tell Halaf. It shows a composite creature of basalt consisting of the head of a man with the feet and wings of a bird, and the tail of a scorpion.

Composite creatures were common during the Hittite, Assyrian, and Babylonian periods of Old Testament history, and many of them have been found in the extended region. They provide us some insight into the background of apocalyptic literature. We find these creatures especially in the Old Testament books of Daniel, Ezekiel, and Zechariah, and in the New Testament book of Revelation (the Apocalypse). See a previous post, “Apocalyptic imagery is not strange,” here.

The composite creature here brought to my mind the events of the sounding of the fifth trumpet in Revelation 9:1-11. 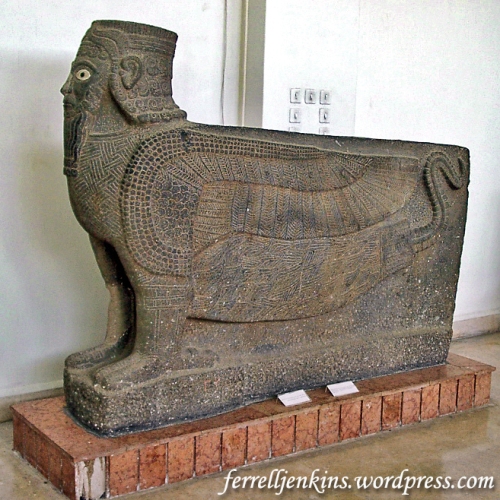 Composite creature showing the head of a man, body and feet of a bird, and the tail of a scorpion. Photo by Ferrell Jenkins.

I am adding an additional image that I was able to enhance to show a little better sharpness. 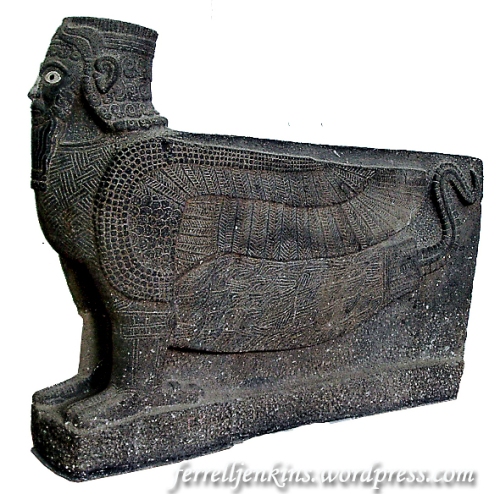 1 And the fifth angel blew his trumpet, and I saw a star fallen from heaven to earth, and he was given the key to the shaft of the bottomless pit.
2 He opened the shaft of the bottomless pit, and from the shaft rose smoke like the smoke of a great furnace, and the sun and the air were darkened with the smoke from the shaft.
3 Then from the smoke came locusts on the earth, and they were given power like the power of scorpions of the earth.
4 They were told not to harm the grass of the earth or any green plant or any tree, but only those people who do not have the seal of God on their foreheads.
5 They were allowed to torment them for five months, but not to kill them, and their torment was like the torment of a scorpion when it stings someone.
6 And in those days people will seek death and will not find it. They will long to die, but death will flee from them.
7 In appearance the locusts were like horses prepared for battle: on their heads were what looked like crowns of gold; their faces were like human faces,
8 their hair like women’s hair, and their teeth like lions’ teeth;
9 they had breastplates like breastplates of iron, and the noise of their wings was like the noise of many chariots with horses rushing into battle.
10 They have tails and stings like scorpions, and their power to hurt people for five months is in their tails.
11 They have as king over them the angel of the bottomless pit. His name in Hebrew is Abaddon, and in Greek he is called Apollyon. (Revelation 9:1-11 ESV)

Knowing that such imagery was common in the ancient Near East should assist us in our understanding of the nature of apocalyptic literature of the Bible.

One response to “Aleppo National Museum – #2”