Making your enemies your footstool

Pul king of Assyria invaded the land, and Menahem paid him a thousand talents of silver to gain his support and to solidify his control of the kingdom. (2 Kings 15:19 NET)

So the God of Israel stirred up King Pul of Assyria (that is, King Tiglath-pileser of Assyria), and he carried away the Reubenites, Gadites, and half-tribe of Manasseh and took them to Halah, Habor, Hara, and the river of Gozan, where they remain to this very day. (1 Chronicles 5:26 NET)

The Assyrian relief below is displayed in the British Museum. 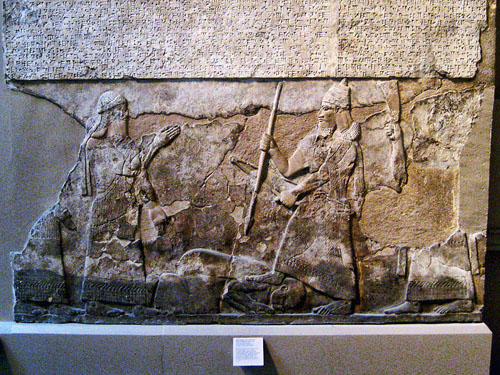 Here is a closeup of what we are seeking to illustrate.

Tiglath-Pileser III Puts His Foot on the Neck of an Enemy. BM. Photo by Ferrell Jenkins.

Several biblical passages come to mind in this connection.

When they brought the kings out to Joshua, he summoned all the men of Israel and said to the commanders of the troops who accompanied him, “Come here and put your feet on the necks of these kings.” So they came up and put their feet on their necks. (Joshua 10:24 NET)

Here is the LORD’s proclamation to my lord: “Sit down at my right hand until I make your enemies your footstool!” (Psalm 110:1 NET)

Peter quotes Psalm 110:1 to show that Jesus is now seated on the throne of David at the right hand of God (Acts 2:35).

For he must reign until he has put all his enemies under his feet. (1 Corinthians 15:25 NET)

One response to “Making your enemies your footstool”