A Hebrew seal dating to the time of the First Temple was displayed yesterday in the City of David in Jerusalem. 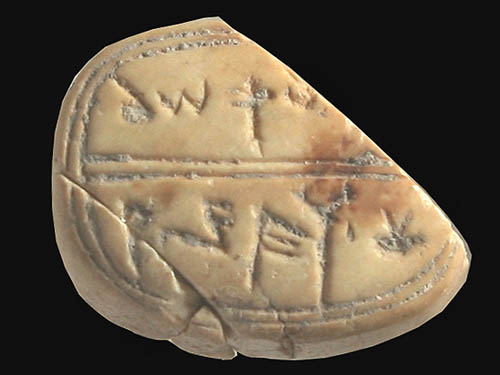 The news release issued by the Israel Antiquities Authority follows:

The seal, which is made of bone, was found broken and is missing a piece from its upper right side. Two parallel lines divide the surface of the seal into two registers in which Hebrew letters are engraved:

A period followed by a floral image or a tiny fruit appear at the end of the bottom name.

The name of the seal’s owner was completely preserved and it is written in the shortened form of the name שאול (Shaul). The name is known from both the Bible (Genesis 36:37; 1 Samuel 9:2; 1 Chronicles 4:24 and 6:9) and from other Hebrew seals.

This name appears many other times in the Bible. Our minds are immediately drawn to the name of Saul, the first king of Israel.

Saul, the son of Kish, lived several decades before the First Temple period. Saul was king of Israel from about 1050-1010 B.C. The temple was built by Solomon about 966 B.C. Do not make the mistake of saying that this is the seal of Saul the king. Seals and bullae (seal impressions) are fairly common. What they reveal is that the names found are the ones we might expect in given time periods, and similar, or sometimes identical, to those names found in the Bible.

According to Professor Reich, “This seal joins another Hebrew seal that was previously found and three Hebrew bullae (pieces of clay stamped with seal impressions) that were discovered nearby. These five items have great chronological importance regarding the study of the development of the use of seals. While the numerous bullae that were discovered in the adjacent rock-hewn pool were found together with pottery sherds from the end of the ninth and beginning of the eighth centuries BCE, they do not bear any Semitic letters. On the other hand, the five Hebrew epigraphic artifacts were recovered from the soil that was excavated outside the pool, which contained pottery sherds that date to the last part of the eighth century.

It seems that the development in the design of the seals occurred in Judah during the course of the eighth century BCE. At the same time as they engraved figures on the seal, at some point they also started to engrave them with the names of the seals’ owners. This was apparently when they started to identify the owner of the seal by his name rather than by some sort of graphic representation.”

It appears that the “office” which administered the correspondence and received the goods that were all sealed with bullae continued to exist and operate within a regular format even after a residential dwelling was constructed inside the same “rock-hewn pool” and the soil and the refuse that contained the many aforementioned bullae were trapped beneath its floor. This “office” continued to generate refuse that included bullae, which were opened and broken, as well as seals that were no longer used and were discarded into the heap of rubbish that continued to accumulate in the vicinity. 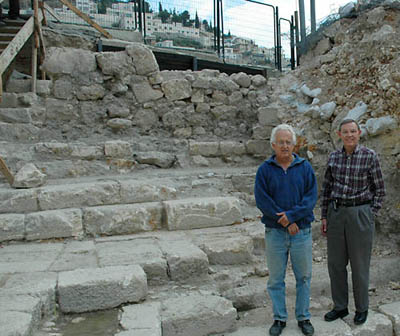 Professor Reich and Ferrell Jenkins at the Pool of Siloam. Photo by Leon Mauldin.

4 responses to “Hebrew seal of “Saul” found in Jerusalem”