Brawls at the Holy Sepulchre

This photo of the Second Temple model, now located at the Israel Museum, shows the location of Calvary in the center of the image. 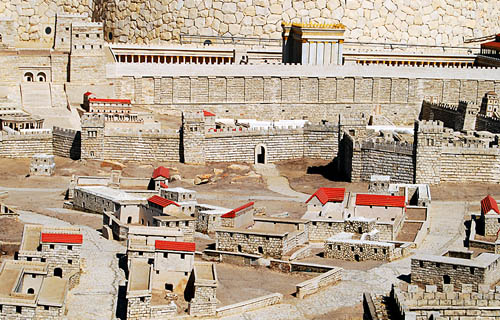 Nothing about the Church of the Holy Sepulchre reminds one of the actual setting where Christ was crucified and buried. One must remember, however, that Jerusalem has been continuously inhabited for many centuries. Strong evidence suggests that the site now occupied by the Church of the Holy Sepulchre was outside the wall of Jerusalem at the time of Christ.

Charlesworth points out that “there are no competing places for Calvary or Golgotha prior to the last century.” He has reference to Gordon’s Calvary and Garden Tomb which is located about a block north of Damascus Gate.

Some columns in the Church of the Holy Sepulchre date from the fourth century church built by Constantine. Through the centuries many additions and changes have been made. It reminds one of a building that needs to be remodeled.

Five religious groups compete for time and space in the Church today. From time to time we hear of a brawl breaking out among the competing groups for certain rights. This link leads to a video of the latest scuffle.

Elizabeth and I were in the Church one afternoon in September at the time of one of the services.

Entrance to the tomb of Jesus in the Church of the Holy Sepulchre. Photo by FJ.

Numerous disputes have arisen through the centuries, and some have not yet been resolved. In photos of the entrance you will see a ladder on the ledge above the blocked door. It has been there since the middle of the 19th century because the sects cannot agree who should remove it.

Entrance to the Church of the Holy Sepulchre. Photo by Ferrell Jenkins.

These things are shameful. I have often remarked that many non-Christians of Palestine known nothing of New Testament Christianity except what they have learned from Church History (read: the Crusades) and the Shrines. If one wishes to learn about Christ and the Early Church let him/her read the New Testament.

We know what the Lord desires of those who believe in Him:

“I do not ask on behalf of these alone, but for those also who believe in Me through their word; that they may all be one; even as You, Father, are in Me and I in You, that they also may be in Us, so that the world may believe that You sent Me. (John 17:20-21 NAS)