Dr. Mark Wilson and his wife, Dindy, shared the evening meal with us at the hotel this evening. Afterwards, Mark spoke to the group about his work in Turkey. Dr. Wilson is the founder and director of the Asia Minor Research Center, and spends about nine months each year working and doing research in Turkey. He has updated several of the works of Sir William M. Ramsay, and written several helpful books on the book of Revelation. You will find much helpful material by Dr. Wilson on the Seven Church Network web site.

Our group listened carefully as Dr. Wilson spoke of the importance of Turkey to the study of the New Testament. Members of the group asked several interesting questions. Several of our tour members were with us last year on the Ancient Crossroads Tour of Biblical and Historical Turkey. This photo shows Dindy and Mark Wilson with Ferrell and Elizabeth Jenkins after tonight’s session. 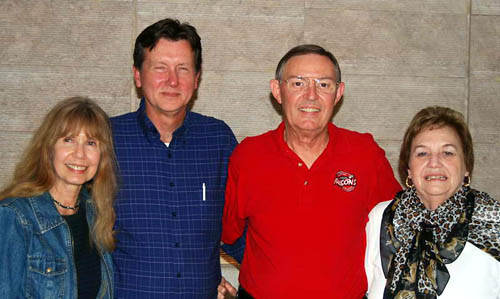 Izmir (Smyrna of the Book of Revelation)

This morning we flew from Istanbul to Imzir, Turkey’s second largest city. Our sightseeing included Mount Pagos with its magnificent view of the city and harbor. Most of the ancient city of Smyrna is buried underneath the modern buildings. A portion of the Agora (marketplace) of Smyrna has been unearthed in the past. Houses have been demolished the a large area adjoining the agora, and preparations are being made for additional excavations. This will be exciting to watch.

There are two important archaeological museums in Izmir. We made short visits to each of them. In the older museum we saw the likeness of Flavius Damianus, an imperial priest under Emperor Septimius Severus, wearing a diadem. This provides an impressive image of the place of emperor worship in Asia Minor in the days following the writing of the book of Revelation.

And to the angel of the church in Smyrna write: ‘The first and the last, who was dead, and has come to life, says this: ‘I know your tribulation and your poverty (but you are rich), and the blasphemy by those who say they are Jews and are not, but are a synagogue of Satan. ‘Do not fear what you are about to suffer. Behold, the devil is about to cast some of you into prison, so that you will be tested, and you will have tribulation for ten days. Be faithful until death, and I will give you the crown of life. ‘He who has an ear, let him hear what the Spirit says to the churches. He who overcomes will not be hurt by the second death.’ (Revelation 2:8-11).