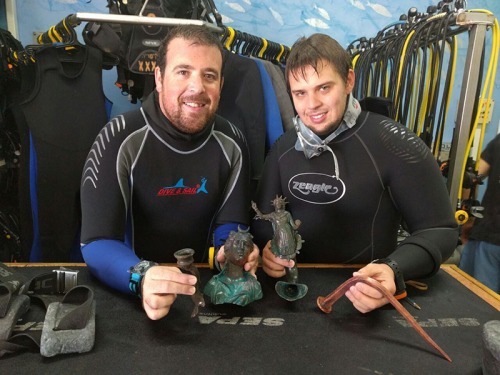 The Israeli papers are ablaze today with photos of a discovery made by two divers in the ancient port of Caesarea in the Caesarea National Park. The official news release of the Israel Antiquities Authority reads in part:

As soon as they emerged from the water divers Ran Feinstein and Ofer Ra‘anan of Ra‘anana contacted the Israel Antiquities Authority and reported the discovery and removal of several ancient items from the sea.

A joint dive at the site together with IAA archaeologists revealed that an extensive portion of the seabed had been cleared of sand and the remains of a ship were left uncovered on the sea bottom: iron anchors, remains of wooden anchors and items that were used in the construction and running of the sailing vessel. An underwater salvage survey conducted in recent weeks with the assistance of many divers from the Israel Antiquities Authority and volunteers using advanced equipment discovered numerous items that were part of the ship’s cargo.

Many of the artifacts are bronze and in an extraordinary state of preservation: a bronze lamp depicting the image of the sun god Sol, a figurine of the moon goddess Luna, a lamp in the image of the head of an African slave, fragments of three life-size bronze cast statues, objects fashioned in the shape of animals such as a whale, a bronze faucet in the form of a wild boar with a swan on its head, etc. In addition, fragments of large jars were found that were used for carrying drinking water for the crew in the ship and for transportation at sea. One of the biggest surprises in particular was the discovery of two metallic lumps composed of thousands of coins weighing c. 20 kilograms which was in the form of the pottery vessel in which they were transported.

“These are extremely exciting finds, which apart from their extraordinary beauty, are of historical significance. The location and distribution of the ancient finds on the seabed indicate that a large merchant ship was carrying a cargo of metal slated recycling, which apparently encountered a storm at the entrance to the harbor and drifted until it smashed into the seawall and the rocks”. A preliminary study of the iron anchors suggests there was an attempt to stop the drifting vessel before it reached shore by casting anchors into the sea; however, these broke – evidence of the power of the waves and the wind which the ship was caught up in”.

Sharvit and Planer stress, “A marine assemblage such as this has not been found in Israel in the past thirty years. Metal statues are rare archaeological finds because they were always melted down and recycled in antiquity. When we find bronze artifacts it usually occurs at sea. Because these statues were wrecked together with the ship, they sank in the water and were thus ‘saved’ from the recycling process”. Sharvit and Planer added, “In the many marine excavations that have been carried out in Caesarea only very small number of bronze statues have been found, whereas in the current cargo a wealth of spectacular statues were found that were in the city and were removed from it by way of sea. The sand protected the statues; consequently they are in an amazing state of preservation – as though they were cast yesterday rather than 1,600 years ago”. The coins that were discovered bear the image of the emperor Constantine who ruled the Western Roman Empire (312–324 CE) and was later known as Constantine the Great, ruler of the Roman Empire (324–337 CE), and of Licinius, an emperor who ruled the eastern part of the Roman Empire and was a rival of Constantine, until his downfall in a battle that was waged between the two rulers.

The harbor at Caesarea. The Apostle Paul used this harbor many times during his preaching tours, and from here was taken to Rome to stand trial before Caesar. Photo by Ferrell Jenkins.

Eusebius of Caesarea (c. A.D. 265–c.339), often designated “The Father of Church History,” was active at Caesarea at the time this ship sank.

Here are photos of some of the items discovered.

A figurine of Dionysus, the god of wine. Photo: courtesy of the Israel Antiquities Authority.

And, a new way to preserve your money.

Lumps of coins that were discovered at sea, weighing a total of c. 20 kilograms. Photographic credit: Clara Amit, courtesy of the Israel Antiquities Authority.

Decorated lamps with twice the light.

A bronze lamp decorated with the image of the sun god Sol. Photographic credit: Clara Amit, courtesy of the Israel Antiquities Authority.

The view under water.

Fragment of a bronze lamp decorated with the image of the sun god Sol, as discovered on the seabed. Photo: Ran Feinstein.

And the nicest thing about all of this…  According to the release, the two divers will be invited to tour the storerooms of the National Treasures. I may take up diving.