The land east of the Sea of Galilee

The land of Bashan is located east of the Sea of Galilee and the Hula Valley along the strip of land north of the Yarmuk River as far north as Mount Hermon. Bashan is mentioned no less than 60 times in the Hebrew Bible.

Og is designated as the king of Bashan about 20 times. Bashan is territory given to half of the Israelite tribe of Manasseh (Joshua 17:1). One of the cities of refuge was Golan in Bashan (Joshua 21:27).

Bashan was noted for its cattle, especially bulls (Psalm 22:12; Ezekiel 39:18). The prophet Amos calls the women of Samaria “cows of Bashan” (Amos 4:1). For sure, he was not a very popular prophet.

In recent history Bashan (Golan) was controlled by Syria, but was annexed by Israel in 1981. 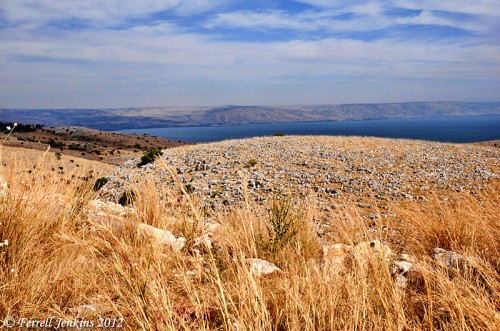 The Sea of Galilee from the north. View toward Bashan in the east. Photo by Ferrell Jenkins.

In New Testament times the same territory, immediately east of the Sea of Galileee, and possibly a little south, was known as the land of the Gadarenes (Mark 5:1; Luke 8:26,37, KJV, NKJV), or the land of the Gergesenes in most modern English versions. These texts record the episode of the healing by Jesus of a man possessed with an unclean spirit. The unclean spirits entered into a herd of swine (pigs) and ran down the steep cliffs, visible in our photo, into the sea (Mark 5:11-13).

One response to “The land east of the Sea of Galilee”